What is liposomal vitamin C?

What is liposomal vitamin C?

Natural vitamin C, also known as ascorbic acid, is an essential nutrient for the healthy and proper functioning of the human body. This molecule is involved in multiple reactions and processes of the organism such as red cell and collagen production, iron metabolism, reinforcement of the immune system, etc. In addition, vitamin C possesses antioxidant properties to fight off damages to cell membrane and DNA from free radicals [1].

Despite being a key element to the organism, vitamin C is not naturally synthesized by the human body (and more broadly by that of primates). As a result, we must find it in our food. Many vegetables, fruits, and herbs such as blackcurrant, red pepper, kiwi, strawberry, parsley, etc. contain vitamin C in varying degrees [2]. A few berries from Africa and South America seem to contain vitamin C in higher quantities. Yet, it is often difficult to reach the recommended 100 mg daily dose by eating these fruits and vegetables only [3] and it may be necessary to supplement our diet with vitamin C complements.

Vitamin C is a fragile molecule that can easily get degraded due to a long storage and/or during cooking of fruits and vegetables, but also because of the action of ambient oxygen, temperature, and even light [3]. To fully benefit from the effects of vitamin C, the encapsulation of this molecules within liposomes (also known as liposomal vitamin C) is a promising strategy.

The role of liposomes?

The root of the name liposomes comes from the old greek lipos (“fat”) and soma (“body”). By definition, liposomes are “vesicles composed of at least one lipid bilayer surrounding an aqueous core” (Figure 1). Put simply, liposomes are similar to bubbles protecting their content and carrying it to a specific destination. In the case of liposomal vitamin C, the destination are the cells of the human body.

The use of liposomes is not recent since they were discovered and subsequently used in the mid-1960s. Due to their resemblance with cell membranes (also a lipid bilayer), liposomes were used as models to study the interactions between drugs and cell membrane. Quickly, their capacity to easily encapsulate various molecules made them attractive in the pharmaceutical industry to protect and deliver drugs with more precision while limiting or suppressing possible side-effects [4]. Progressively, liposomes were employed  in other sectors: in cosmetic products, in agriculture to limit the spread of pesticides, etc. [4, 5]. More recently, liposomes have been proposed in the food industry to protect fragile nutrients, to release specific enzymes, to generate new flavours, etc. [5].

One of the liposomes characteristics is their small size, generally between a few tens nanometers (1 nm = 1 billionth meter) and a few micrometers (1 μm = 1 millionth meter). By comparison, a hair diameter ranges between 50 and 100 μm, which implies that liposomes are 100 to 1000 times smaller. For this reason, liposomes can be categorized as nanoparticles or as microparticles depending on their diameter. Their main objective is to carry, protect, and deliver their content to their final destination: the cells of our body.

This small size is advantageous because it allows liposomes to cross tissues in the human body, for instance to pass from the intestines into the bloodstream, where it can travel to other parts of the body. This also impart some “stealth” - at least provisory - as small particles may escape cells of the immune system (in charge of detecting and eliminating foreign bodies from the organism) [6]. Thanks to this provisory stealthiness, liposomes are able to travel for extended period of time in the bloodstream prior to delivering their content and being cleared out of the human body.

Another specificity of liposomes comes from the molecules composing their membrane, namely lipids (also known as fat). Lipids are nutrients that the body requires for its proper functioning, alongside proteins and carbohydrates. Lipids are found in butter, oil, etc. Liposomes are generally made of a type of lipids called phospholipids, the same than that composing the membrane of cells. Other types of lipids such as soya lecithin can also form liposomes. As a result, the appropriate choice of lipids ensures that the vesicles are “biocompatible”, i.e. are tolerated by the organism without eliciting undesirable or toxic reactions.

• Lipids are amphiphilic molecules, which means they are composed of two parts:

• A hydrophilic “head”, which possesses an high affinity for water;

• A hydrophobic “tail”, that seeks to avoid water.

Lipids are not soluble in water, but they can self-organize so that the hydrophobic tails have as little contact with the surrounding water as possible. Hence, lipids form “bubbles” where the hydrophobic tails face each other inside the spheres whereas the hydrophilic heads face outward and come in contact with water. These bubbles possess a oily core and are called micelles (Figure 2). The phenomenon is similar to what occurs in vinaigrette, when vinegar and oil are mixed and form tiny droplets.

The structure of liposomes is slightly different since lipid molecules are not merely one next to another but form a bilayer, where hydrophobic tails face each other (Figure 2) [4, 5]. In addition, this bilayer structure entraps a small quantity of water in the center of the structure: it is in this aqueous core that hydrophilic compounds such as vitamin C can solubilize and are transported. It is also possible to encapsulate hydrophobic compounds, in which case the molecules are solubilized within the lipid bilayer rather than in the aqueous core. 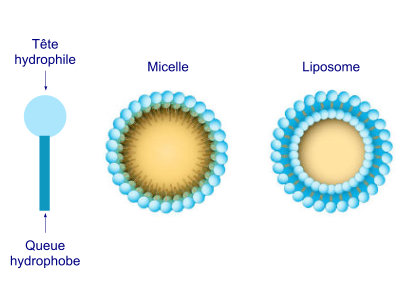 A versatile structure that can adapt to the needs

Liposome characteristics, such as size, fluidity/stiffness of the lipid bilayer, or stability in blood mainly depend on the type of selected lipid and on the manufacturing method. Many liposome synthesis methods have been devised over the last decades  [4, 5, 7], affording control over the dimensions but also over the internal structure of the liposomes. More specifically, it is possible to categorize liposomes based on the number of bilayers (also referred to as lamella) they contain [8]. The simplest liposomes only contain a single layer entrapping an aqueous core, which is the system described so far. These are known as unilamellar liposomes and can be further subdivided based on their size (Figure 3):

• Large unilamellar vesicles (LUV), with a diameter ranging between 100 nm and 1 μm;

More complex liposomes contain several layers, similarly to an onion structure (Figure 3). These vesicles are mainly used to release their content in several times (one layer after another). These vesicles can be subdivided based on the number of compartments:

• Oligolamellar vesicles, when the number of compartments goes up to 5. Their diameter usually ranges from 100 to 50 nm;

• Multilamellar vesicles (MLV) when more bilayers (usually up to 20) can be found within the vesicle. This also implies that the diameter of MLV is larger, superior to 500 nm.

One last category, called multivesicular liposomes (MVL), consists in a giant vesicles entrapping multiple liposomes (Figure 3). Their application is more specific as they allow the combination of multiple compounds simultaneously into a single liposome.

Liposomal vitamin C produced by Goldman laboratories belong to the unilamellar category, which are simpler to manufacture and optimal to protect and deliver the vitamin C throughout the whole body.

The advantages of encapsulating vitamin C within liposomes

In this case, why using liposomal vitamin C?  The reason is that free vitamin C, i.e. vitamin coming from food or from complements and circulating in the bloodstream, see its action limited by multiple factors:

• Fragility of the vitamin C molecule: the properties of vitamin C can be degraded by a change of pH (occuring in the digestive tract), because of the oxygen dissolve in blood, when cooking fruits and vegetables, or even under the action of light when storing food [3];

• Limited absorption by the intestine (bowel tolerance): regardless of the dose of vitamin C that you can ingest in one go, only a limited amount effectively passes through the blood. The reason is that the intestine can only process and absorb a limited amount over a given time. Beyond a dose of 100 mg, the excess of vitamin is directly eliminated (urine, feces) [9, 10];

• Effects of high doses: a large excess of vitamin C can cause diarrhea and some other digestive problems, although no toxicity has been evidenced [11];

• Action limited in time: once vitamin C crosses the intestine and passes into the blood, its action does not last more than a few hours before its clearance occurs. By extension, this limits the distribution of vitamin in the body [12].

Considering the liposomes characteristics, it is easy to understand how these vesicles can help enhancing the benefits of vitamin C. Liposomal vitamin C is able to overcome the limits listed above by offering:

• Biocompatibility: the choice of natural lipids guarantees a lack of deleterious or toxic effects from the liposomes [4]. Many scientific and clinical articles establish the biocompatibility of liposomes;

• Protection: vitamin C, dissolved in the aqueous core of liposomes, is fully protected from oxygen, change of pH, and other environmental parameters that may degrade the vitamin [4, 5];

• Higher concentration of vitamin: each liposome concentrates vitamin C in its core so that each vesicle can deliver a higher dose of vitamin C than oral complements [4, 8];

• Lack of side effects: even though the concentration in vitamin is higher, its insulation within the vesicles lower the risks of diarrhea and other digestive problems;

• Longer action: owing to the lack - or low - degradation of vitamin C within the liposomes and to the particle stealthiness with regards to the immune system, liposomes can circulate in the blood for extended periods of time before their clearance [13];

• Enhanced distribution: since liposomes can stay longer in the blood, they are more readily distributed throughout the body. As a results, more tissues and cells can benefits from the action of vitamin C [13];

• Easier passage into the cells: thanks to the similarity between liposomes and cell membrane, the vesicles have an advantage to penetrate into the cells [14];