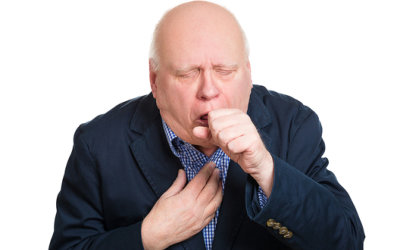 Bronchitis belongs to the so called lower respiratory tract infections. From a physiological point of view, it is an inflammation of the mucus membranes covering the bronchial tree, which is the network of air tubes that carries oxygen towards and carbon dioxide from your lungs. Bronchitis may have a sudden onset and a relatively limited duration, or be constant and last for months or even years. In the first case it is characterized as acute, whereas in the second, chronic.

Acute bronchitis is relatively common and it usually develops secondary to an infection with a respiratory virus, e.g., from the common cold, the flue or whooping cough. Although it resolves on its own within a few days, in some occasions, like, for instance, in people with weakened immune system, it may deteriorate further pneumonia. On the other hand, chronic bronchitis is mostly associated with smoking and chronic obstructive pulmonary disease (COPD).

What are the bronchitis symptoms ?

Symptoms of acute bronchitis include an irritating, persistent cough, which is productive with mucus, either clear or colored yellowish to green. Moreover, patients feel tired, sometimes are short of breath, feel their chest heavy and may even have low fever and tremor. If the cough is violent and is accompanied by a characteristic sound where the person is gasping for air (whooping cough) then this might be a more serious condition called pertussis, which needs to be carefully dealt with –especially if the patient is a baby or a small child.

Acute bronchitis of viral etiology is self-resolving and will improve after a few days, although the cough may linger for a few weeks more. However, if it doesn’t get better after 2-3 weeks, or is accompanied by other signs of severity (e.g., wheezing, high fever, or blood in the sputum), then it is strongly advise to see a doctor as soon as possible.

Since most episodes of acute bronchitis are caused by viruses, no antibiotics are needed. Treatment is mainly targeted towards relieving the symptoms, increasing the patient’s comfort and protecting against complications. Fever will respond to plain antipyretics (paracetamol or ibuprofen). Avoid using cough medication, as it may suppress the ability to remove excess mucus. It is strongly advised to keep well hydrated and get plenty of rest.

There is some evidence showing that vitamin C can be helpful in relieving symptoms of bronchitis. A Cochrane systematic review found that, although vitamin C does not seem to be very efficient in preventing the onset of viral infections, it does a good job in helping the immune system to clear them off, especially in elderly and weakened individuals [1].

Moreover, vitamin C has been shown prevent the onset of symptoms from respiratory virus-induced illness [2]. This has been further supported by the review of Sgarbanti et al., who described more studies that found a positive association [3]. It is believed that when high doses of vitamin C circulate in the extracellular environment, it helps scavenge the oxidative molecules that are produced through the inflammatory process, thereby limiting the damage caused to adjacent healthy tissues.

However, in order to reap maximum benefits from vitamin C administration, its concentration must be kept high, for prolonged periods of time. Unfortunately, traditional vitamin C levels after oral administration of conventional forms are tightly regulated, and ingesting even more doesn’t increase them further, although it raises the risk of adverse gastrointestinal effec ts. One way to circumvent this limitation is by using intravenous vitamin C, a solution that is neither convenient, nor cheap. There would be a complementary solution: true liposomal encapsulation. Liposomes are drug delivery systems of nanoscopic dimensions, which allow for complete absorption from the gut. Their lipophilic nature enables them to bypass the tight plasma regulation of vitamin C concentration and achieve very high levels, becoming readily available to the immune cells that fight the infection. Moreover, they have an added advantage over intravenous vitamin C: they have improved pharmacokinetic properties, which allow them to remain in circulation much longer, up to 8 hours after ingestion.

Goldman Laboratories are a leading researcher and designers of liposomal products, among which a highly bioavailable form of vitamin C, LIPOSOMAL VITAMIN C 500MG. By using a high-quality, true liposomal vitamin C supplement, it is possible to achieve proper vitamin C doses .

[2] : Gorton H, Jarvis K. The effectiveness of vitamin C in preventing and relieving the symptoms of virus-induced respiratory infections. Journal of Manipulative and Physiological Therapeutics. 1999;22(8):530-533.